Regular price $19.00 Sale price $0.00 Unit price /per
Shipping calculated at checkout.
TGF (Trigger Guard, Forward Controls) is available in standard (straight) and winter versions. Both are machined from 7075 aluminum, they do not have spring loaded detent for the front, but use a set screw like Magpul's, and a standard trigger guard roll pin in the rear.

We retained the use of roll pin for TGF's rear, as it's reliable and robust, it also will not loosen. The front set screw (1/16 Allen wrench is required) is flush with the receiver and doesn't protrude.

Both versions feature a canted front edge to make rocking the magazine into the mag well easier. The winter version has as much constant/unchanged space from the trigger bow forward as possible (instead of the space inside tapering and decreasing as the trigger guard nears the receiver's front trigger guard holes). The space to the rear of the trigger bow is inaccessible for the user's finger, so it's kept small and low.
Available in anodized black, desert tan, and OD green.
TGF is designed for use with TDP spec forged lower receivers, and fills the gap forward of the pistol grip, between the trigger guard "ears" (note that TGF will not swing down like TDP spec trigger guards).  All the sharp edges and corners have been removed.

Please note ZEV produced lower receivers appear to have shorter trigger guard ears, and these shortened ears expose a bit of the bottom of the TGF, as shown below.  This has no bearing on functionality.   The latest Mega lowers (with the old Mega atomic whirl) has been reported to have longer ears that do cover the TGF.
Left: ZEV made lower receiver.  Right: Colt receiver.  On these ZEV produced receivers, TGF lines up with the grip's corner, where the  trigger guard is supposed to be.

On receivers that are adhering more closely to TDP specs and tolerances, TGF is near flush with the trigger guard ears. 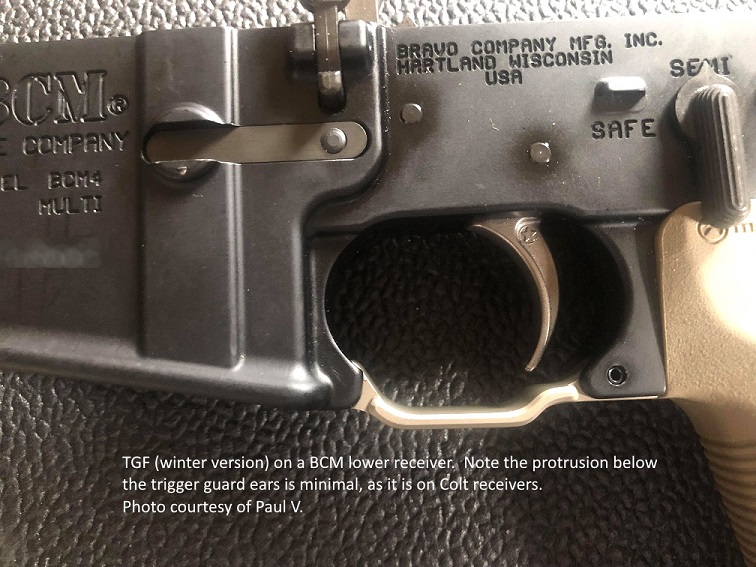 TGF installed on a Colt receiver 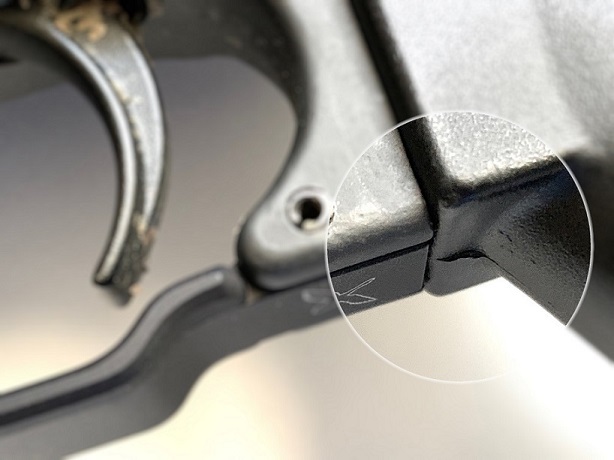 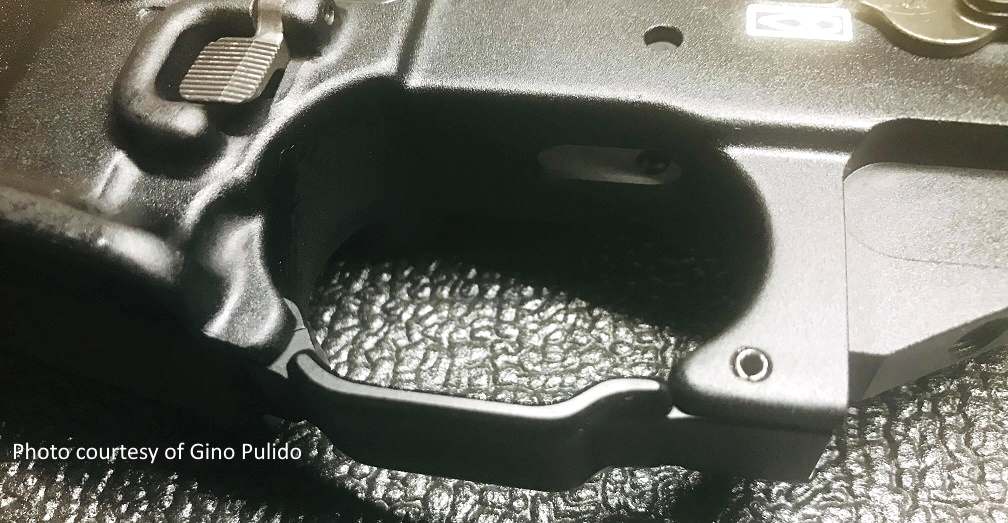 TGF is proudly designed and made in the USA.   A trigger guard roll pin and set screw (for the front) are included. A 1/16 Allen wrench is required (not included).
NOTE;
TDP width for the trigger guard is 0.430 +/- 0.003. TGF follows TDP specs and tolerances. The gap between the rear trigger guard ears is 0.438 + 0.008 / -0.000. Given the rather loose tolerances of the space between the trigger guard's rear ears, TGF (or any trigger guard, for that matter) could be just right, or slightly loose.  This is normal, the TDP spec width of the trigger guard and that of the lower inside the trigger guard ears all but guarantee an in spec trigger guard will be loose inside the ears.
TDP diameter for the front right ear of the trigger guard is 0.125 +0.003.  If the hole is on on the upper side of the tolerance, TGF's set screw can rattle inside.  This too, isn't unique to TGF.
We'd like to remind folks that AR15s/M16s are tools, and every part has a tolerance value.  It isn't an advantage or useful feature for combat weapons to be so tight that they lose their tolerance for debris, sand, and mud.  TDP trigger guards swing down, and they wouldn't be able to do so if any foreign object in its way can stop them from doing so.
We don't fudge and get creative with TDP specs and tolerances. If we made TGF on the wide side (didn't even think about it, but we wouldn't do it anyway because it has problems of its own), we'd risk the TGF being too tight and not fitting Colt, LMT and BCM lower that are true to TDP specs. We design and produce duty grade components for duty/combat weapons, and we adhere to TDP specs and tolerances.